Join the School of Public Health’s MHA Program and the MHA Alumni Association to learn from a panel of accomplished healthcare leaders as they reflect on Leading in Challenging Times.

Rolling power failures, climate related disasters, fast moving pandemics, communities experiencing trauma – our healthcare leaders have been put to the test. Hear from three University of Minnesota School of Public Health MHA Program alumni who have led their organizations through challenging times and learned some lessons along the way.

Register for this free virtual event. All University of Minnesota Alumni, Friends, and Students are invited to participate.

Register for the Event

Mohammad graduated from the University of Minnesota’s residential MHA program in May 2017. He has been with St. Luke’s Health in Texas since graduation starting with a fellowship before moving into operations. He has been at his current role as the Director of Hospital Operations within Patients Medical Center for more than two years and is the pilot individual in the St. Luke’s COO Development Program.

Mohammad is a Texas native having been in the Lone Star State for the entirety of his life, with the exception of the cold years in Minneapolis while he attended the University of Minnesota’s MHA program and a summer residency at Rhode Island Hospital in Providence.

Dr. John Fankhauser is the CEO of Ventura County Medical Center and Santa Paula Hospital.  He has served as a physician executive in a number of positions with a focus and commitment on public service and care for the underserved.  His previous roles include Chief Medical Officer for VCMC and Ventura County Health Care Agency as well as CMO of Santa Clara Valley Medical Center in San Jose.  Prior to 2007, he was a full-time faculty member for the Ventura Family Medicine Residency Program.

From 2013 to 2018, Dr. Fankhauser and his family were involved in a medical mission in Liberia where he served as the CEO of ELWA Hospital which played a critical role during the Ebola crisis. When three of his American colleagues contracted Ebola Virus Disease, he and a small team of doctors treated them and evacuated them to the U.S.  In 2020 he received the UW School of Medicine Alumni Humanitarian Award.

Sherie Hickman is the CEO of Sutter Delta Medical Center, part of the Sutter Health system, located in the Bay Area of Northern California. With 145 licensed beds, the hospital provides a range of services including cardiac catheterization, serving as the STEMI receiving center for the area.  Sutter Delta was designated by U. S. News and World Reports as one of America’s top 100 hospitals in Coronary Intervention.  Before transitioning to Sutter Delta, Ms. Hickman served as the Administrator for Sutter’s Novato Community Hospital, a role she served in for two years.  During her tenure in Novato, the hospital achieved the distinction of becoming only the 6th hospital in California and the 58th in the country to attain Advanced Certification by the Joint Commission in Total Hip and Total Knee replacement procedures.

Prior to joining Sutter Health, Ms. Hickman served as Vice President, Operations and Chief Operating Officer for Sequoia Hospital, part of the Dignity Health organization. Sequoia has 204 licensed beds and provides a range of specialty services including elective and emergent cardiac catheterization, electrophysiology, cardiovascular and robotic surgery. The hospital is a Joint Commission certified stroke center with Gold Plus Quality award status from the American Heart Association.  During Ms. Hickman’s tenure, Sequoia Hospital attained many other special designations, including: one of the 50 Best Hospitals as measured by Healthgrades; Consumer Reports #1 rating in California and top 15 hospital in the country for heart surgery; and “Best Birth Center” rating by Bay Area Parent magazine.  Ms. Hickman served as the Executive Sponsor for the 147,000 square foot, $290 million new Sequoia hospital Pavilion which opened in October, 2014.

Prior to joining Dignity Health, Ms. Hickman worked for the Kaiser Permanente organization; her last position there was serving as Chief Operating Officer at the Walnut Creek medical center, a 233 licensed bed facility offering a range of tertiary care services.  She started her career with Kaiser Permanente in Southern California where she served in a number of medical center leadership positions in inpatient acute care, ambulatory care and post-acute care services.  She relocated with Kaiser Permanente to North Carolina in the mid-1990’s to take the position of Area Administrator for the Kaiser Foundation Health Plan in Charlotte.

In 1999, Ms. Hickman joined the Presbyterian Healthcare System in Charlotte, North Carolina in the position of Executive Director and Chief Operating Officer for their affiliated physician practice organization.  In this role she was responsible for joint venture development with community-based specialists, the inpatient Hospitalists program, specialty and primary care physician practices, and for the hospital’s cancer center.  Ms. Hickman’s passion for alpine skiing led to her move back to the west coast and a return to Kaiser Permanente in 2001. She worked for that organization until her move to Sequoia Hospital in 2011.

Honoring the Retirement of Jon Christianson

We will take a few moments during our May 11 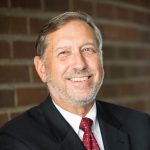 event to honor the outstanding career of Dr. Jon Christianson.

Since 1986, Dr. Jon Christianson has been shaping the educational experience for MHA students. As James A. Hamilton Chair in Health Management, he is deeply grateful for the many generous ways that MHA alumni have contributed to the program. Dr. Christianson encourages investment in student scholarships so that future generations of students can learn from the extraordinary faculty of the MHA Program.  Dr. Christianson writes, “The faculty who have recently joined the MHA program are absolutely outstanding. It’s wonderful to know that the program is in good hands and that future MHA students will continue to have a terrific experience under Jean Abraham’s program leadership.”

At Dr. Christianson’s request, grateful alumni, colleagues, and friends are encouraged to honor his contributions to the MHA Program with a gift to support scholarships for MHA students. Learn more.

After our panel, MHA alumni and students are invited to connect for a networking session from 4:00-5:00 pm CT. During this time,  you’ll have the opportunity to share your experiences, exchange ideas, and build your professional network – all online. Small groups will be organized by grad year (depending on the number of registrants, we will have a group for emerging professionals, mid-career professionals, senior leaders, and retired professionals).

Small groups will have the opportunity to discuss:

This session, brought to you by the MHA Alumni Association, will be hosted online via Zoom.