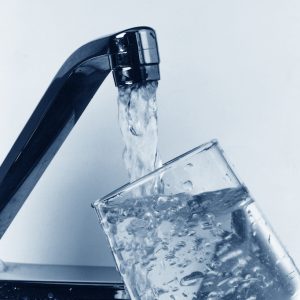 Since the 1970s, scientists have known about the presence of tiny bits of plastic — microplastics — churning in the oceans and being ingested by birds and sea life. Recently, new research has shown the particles are also in the Great Lakes, which thousands of communities rely on for fresh drinking water and other uses.

The potential threat of microplastics in the water and other products people consume worries Mary Kosuth, a microplastics researcher and 2017 graduate of the School of Public Health.

“One thing that makes plastic a desirable material for containers and packaging is that it is durable and relatively inert,” says Kosuth. “But, they are also made of chemicals — like BPA — that can leach into foods, and the plastic particles can adsorb and concentrate other potentially-toxic substances, which we might then ingest.”

Kosuth recently conducted a study to help determine how often microplastic particles are found in the things we frequently eat. For the study, Kosuth measured the amount of microplastics in samples of internationally sourced salt and tap water, as well as beer made from Great Lakes water. The study, co-authored by Associate Professor Elizabeth Wattenberg, was published in the journal PLOS ONE.

The study revealed that 81 percent of tap water samples — and all tested brands of salt and beer — contained microplastics.

“Our study basically confirmed that this stuff is everywhere,” says Kosuth. “In fact, during the study, we ran lab blanks with ultra-filtered water to make sure the equipment was clean, and even then found small amounts of plastic fibers. These particles are floating in the air and could have been coming from my clothing or the ventilation system — anywhere! Just the fact that I had to be so careful to keep everything clean of plastic shows how much of it is present in our environment.

What should we do to avoid microplastics?

Kosuth said one answer is for everyone to be conscious of how much single-use plastic they use, such as plastic bags.

“We need to change behavior among people and industries, and improve policies to reduce the amount of single-use plastic,” says Kosuth.

Kosuth hopes to continue her research and is making plans to conduct studies to pinpoint the sources of microplastics in municipal water and beer.