The first existence of the environmental health program traces back to the earliest days of the University of Minnesota when the State Board of Health transferred to the campus and began offering courses in “sanitary sciences” addressing topics in sewage, ventilation, lighting, and heating of private homes. 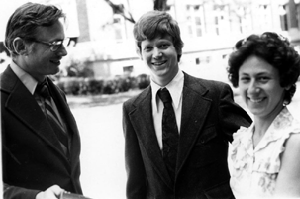 By the 1930s, the formalized Division of Sanitation and Public Health Engineering had emerged under the direction of Professor George Pierce within what was then known as the University’s Health Department. In 1949, Professor Herbert Bosch partnered with Ruth Boynton, director of the health service, to create a program dedicated to the control of environmental hazards called public health engineering and later renamed environmental health.

In recent history, the Division of Environmental Health Science has continued to expand its research and academic programs. The division offers graduate, doctoral, and joint degrees in diverse concentrations. These concentrations focus on important and emerging issues in environmental health, including infectious diseases, toxicology, exposure sciences, environmental chemistry, industrial hygiene, medicine and nursing, epidemiology, injury prevention, and global health. Research continues to play a vital role as the division is home to multiple research and education centers, and collaborations with partner institutions.

In 1874 the University offers instruction in public hygiene, including “sewerage and drainage of towns, heating, lighting and ventilation of dwellings and public buildings.”

1922­-1944 – Courses in sanitary science are taught by Health Department staff.

1939 – Drs. William and Charles Mayo provide endowment to help establish a School of Public Health and a Mayo Professorship in Public Health. 1944 The Board of Regents creates the School of Public Health (SPH). The man named head of the new school, Gaylord Anderson, is serving in the U.S. Army Medical Corps at this time, so student health service director Ruth Boynton holds his place.

1951-1961 – Herbert Bosch is director of environmental health program and adds courses in air pollution and control of radiation hazards.

1995-­1999 – Jack Mandel becomes division head and is named Mayo Chair in Public Health. There are 22 faculty members in the division and research funding exceeds $2 million annually.

2014-present – Bruce H. Alexander is named division head in 2014. The division begins to expand its faculty in injury and violence prevention, systems toxicology, exposure science, environmental infectious disease, and global health. New initiatives include a doctoral program in systems toxicology, a 4/1 BS/MPH degree with the College of Biological Sciences, and the Exposure Science and Sustainability Institute is established.